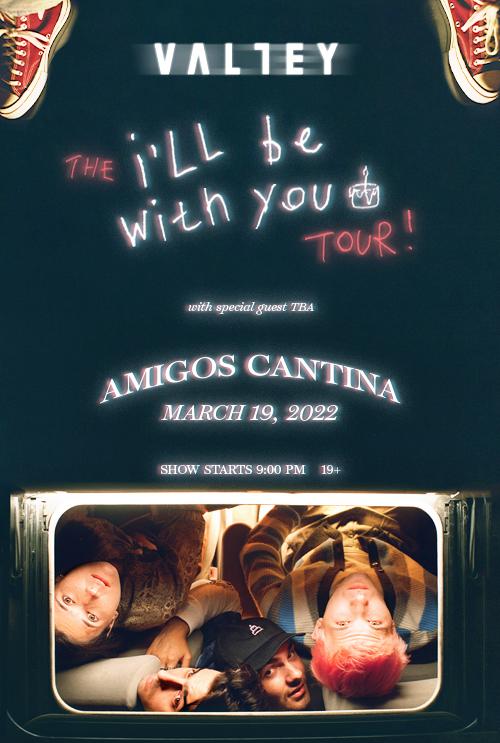 VALLEY: I'LL BE WITH YOU

With over 210 million global streams, JUNO Award-nominated, Valley put together alternative pop with the care, adventurousness, and personal touch of a handmade burned CD. Cycling through moods like your favourite throwback Pinterest board, the Toronto quartet—Rob Laska, Michael “Mickey” Brandolino, Alex Dimauro, and Karah James—amplify sticky hooks through eloquent songcraft that’s cognizant of what came before, yet ready for the future. In 2016, Valley formed by accident when a local studio double booked them. During high school, Mike and Karah played in one band, while Rob and Alex played in another. They introduced themselves with self-written, self-produced releases, including the EP This Room Is White [2016] and full-length debut MAYBE [2019]. They joined Lennon Stella and The Band CAMINO on sold out tours across North America and even picked up a 2020 JUNO Award nomination in the category of “Breakthrough Group of the Year.” Following 2020’s sucks to see you doing better EP, the single “Like 1999” exploded. Its genesis traces back to a TikTok post of an unfinished version. After Valley completed the tune in under 48 hours, it went on to inspire hundreds of thousands of creates and eclipse 20 million streams while breaking boarders, appearing on viral charts in the U.S., Philippines, Korea, Japan and more. After amassing over 100 million streams and earning acclaim from the likes of Atwood Magazine and American Songwriter, the group transmit this signature style through their latest EP Last Birthday for Universal Music Canada and new label partner Capitol Records. Valley are back on the road this year, playing their first American festivals this past summer at Wonderbus Festival and Bottle Rock Festival and are currently supporting COIN for a 17-day US tour.