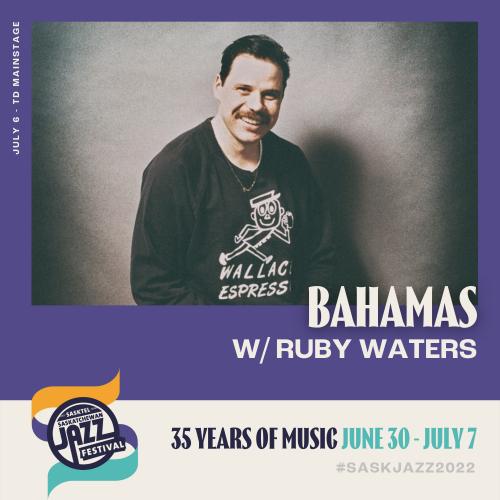 2018’s Grammy-Nominated Earthtones saw Bahamas joining forces with bassist Pino Palladino and drummer James Gadson (the rhythm section behind D’Angelo’s Black Messiah), and even merging them with his stable of longtime heavyweight musicians on Kimmel. Jurvanen created Sad Hunk with those same collaborators — Christine Bougie (guitar), Don Kerr (drums), Mike O’Brien (bass), and Felicity Williams (vocals). Recorded by longtime producer and multi-Grammy nominee Robbie Lackritz (Feist, Jack Johnson, Robbie Robertson), Sad Hunk is the next step in Afie’ virtuosic signature style of restraint as a guitarist. It also features the graceful guitar work of Sam Weber, a virtually unknown musician whom Jurvanen discovered on YouTube. “I sort of had a musical crush on Sam, so I invited him to open for us a few years ago and we ended up hitting it off,” says Jurvanen. “I asked him to come out and record with us without even knowing what I wanted him to play, which is generally how I like to work with people: I always think it’s so much more interesting when you let them find their way into the songs on their own.”

An album born from charmed spontaneity and raw imagination, Sad Hunk unfolds in a genre-less groove-heavy and jangly sound beautifully suited for Jurvanen’s warm vocal presence. In its musing on what’s essential and what’s expendable in today’s world, the album offers up songs like “Own Alone” — a brightly kinetic track threaded with a bit of self-effacing wisdom (“Too broke to feel so wealthy/Too young to feel unhealthy/Too old to understand the selfie/Too far gone for you to help me”). “That song came from being fascinated by how being on our phones all the time changes us at a cellular level — it changes the way you think, it changes the way you operate,” says Jurvanen. “I’m not suggesting we become Luddites and churn our own butter, but I do think we need to question whether you really need to have this thing on you at all times.”

Critically-acclaimed Métis/Slovakian singer-songwriter Ruby Waters, often praised for her unique, raspy voice, evoking the enduring talents of Janis Joplin and Amy Winehouse, has quickly garnered attention as a fast-rising indie alternative artist over the past two years. Hailing from the small town of Shelburne, Ontario, and the child of two musician parents, Waters was immersed in the world of music from the day she was born. She mixes modern tempos and catchy guitar riffs with a decidedly unrefined approach to every song she makes, maintaining a signature raw energy. Her most recent EP, If It Comes Down To It (Oct. 2020), received worldwide acclaim, and features the single “Quantum Physics,” which amassed over 3 million streams in just 6 months, setting the bar for what’s to be expected from the young, soulful artist. In the same year, Waters peaked at #5 on Canadian Alternative radio and Rock radio with the single “Supernatural,” all of which culminated in her being chosen as Spotify’s Radar Artist at the end of 2020. Waters was hand-picked by international best-selling artist City & Colour to open for their US tour with multiple sold-out dates in major US markets including New York and Los Angeles. She’s already captured the attention of Billboard, CBC, and NOW Magazine, and is celebrated for her music’s moody sounds and powerhouse vocals, coupled with her honest and unapologetic lyrics. Ruby Waters is strongly positioned for a fast ascension, with no signs of slowing down.