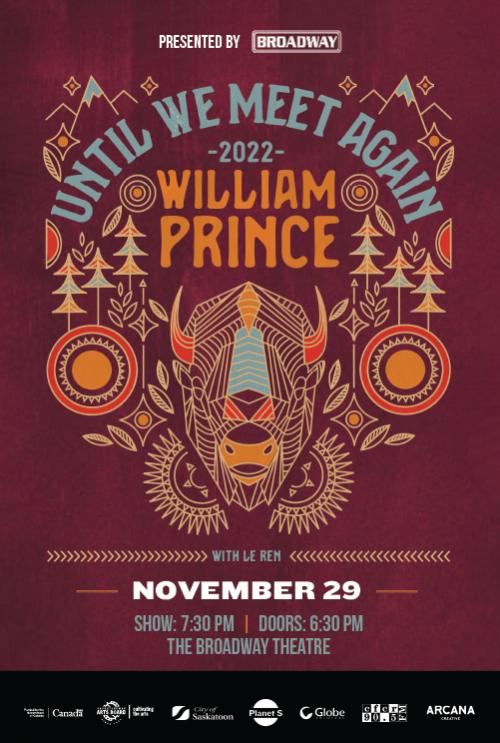 7:30PM show, 6:30PM doors. All Ages. Mask-wear is required when attending events at The Broadway Theatre.

William Prince approaches the big questions with humility and curiosity, and his songwriting is a masterclass in skilful simplicity. Since his JUNO Award win in 2017, Prince’s momentum has continued to build, with each new album adding depth and dimension to an exceptional body of work that has received international acclaim. From national network television appearances, top tier media coverage and performances at major international festivals, William Prince has become one of the country’s most respected and celebrated songwriters.

Le Ren’s close-to-the-bone, heartbreak folk songs seem, at first, to tap into a shared musical memory. A melody swirls forward and you’re just sure it’s known to the back of your mind; was it in a movie you saw, some classic mid-60s set piece? Maybe it’s something you heard as a kid, in the backseat of your mom’s Cutlass, or the shotgun seat of your own. But before you can zero in through the fog, your heart is torn apart by her voice — rich, direct and mellifluous — steering you through these slowburn tunes about real-life loss.

Lauren Spear, the artist behind Le Ren, created a physical quilt to mirror the assemblage of stories that comprise her album Leftovers: a coming-of-age collage that collects over four years of past experiences and finds their present meaning. “When I think of leftovers, I think of things that have been cast aside,” she says. “When they’re picked back up or remembered, they can be repurposed... Leftovers came to mean a collection of feelings and moments of the past that still remain relevant to my present.”