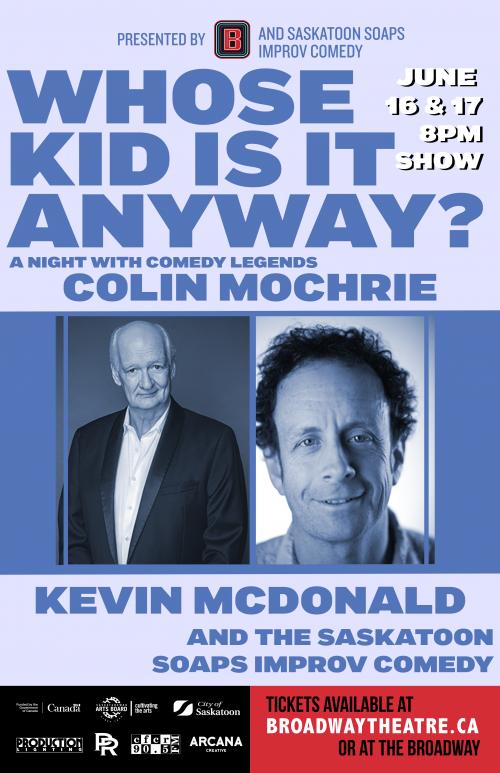 Whose Kid is it Anyway? ENCORE SHOW

Join the Saskatoon Soaps for the finale of their 38th season of leaving Saskatonians in stitches, complete with some very special celebrity guest stars who will be contributing to the overall chaotic hilarity that makes up a Saskatoon Soaps Improv Comedy show!
By popular demand, we have added a 2nd SHOW! Please note that all ticket purchased to the show on Friday June 16th are NON-TRANSFERRABLE.
Show at 8PM. Doors open at 7PM. All ages. Until further notice mask-wear is required when attending events at The Broadway Theatre.

Colin Mochrie:
Scotland, that craggy, majestic, malt whiskeyed land, has spawned many myths besides the Loch Ness Monster. One such legend is Colin Mochrie (Hilaritycus smoothius). A migratory creature that left his birthplace for the Great White North (Canada), Colin learned his theatrical craft through repeated behavioral rituals at Studio 58 located in the mountain nestled, sparkling jewel of the Northwest, Vancouver, British Columbia.

A hard-working, imaginative mammal, Colin used his chameleon-like skills to blend in with others of his ilk, never being noticed, until noted anthropologists Dan Patterson and Mark Leveson discovered him at the Toronto Second City. Moving him to the Whose Line is it Anyway Institute in historical and damp London, England, Patterson and Leveson slowly groomed Colin till he became international sensation. Working with Drew Carey at the U.S based institute of the same name, only increased interest in the reclusive beast.

Kevin McDonald:
Best known for his five years performing with the Canadian comedy troupe, The Kids in the Hall, McDonald was born in beautiful Montreal, Quebec. McDonald was inspired to become a performer during the time his family lived in Los Angeles for less than two years. Returning to Canada, he decided he was going to become an actor while attending high school in Mississauga, Ontario.

Moving to Toronto when he was 19, McDonald enrolled at Humber College where he worked on drama studies. Kicked out of the course, a teacher recommended he use his talent at Toronto's Second City improv workshop. Taking that advice to heart, he went and met up with Dave Foley. The two became fast friends and created the group The Kids in the Hall, which began in local clubs where they picked up three more players, Scott Thompson, Bruce McCulloch and Mark McKinney.

Along with the unique collection of characters created by the cast members, the company has shared the stage with many celebrities over the years including Kim Coates, Steve Smith AKA “Red Green”, Martin Short, and Catherine O'Hara.

Members of the Soaps company have performed with most of the province's professional theatre companies including Persephone Theatre, Shakespeare on the Saskatchewan and Regina's Globe Theatre. The cast of the Saskatoon Soaps has changed over the years - but one thing has not - their dedication to LIVE made-up-on-the-spot comedy.