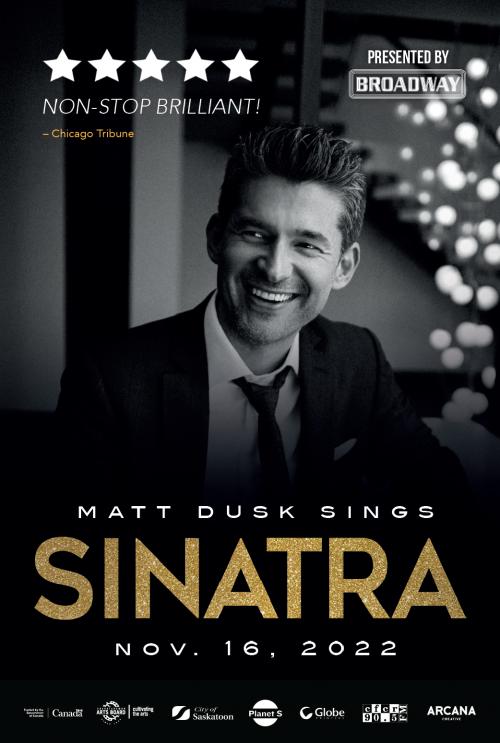 NEW CONCERT DATE! The show with Matt Dusk has been rescheduled to November 16th at The Broadway Theatre. All previous tickets purchased will be valid for the new show. All you need to do is update your calendar and we'll see you there!

Multi-award-winning, Platinum-selling artist Matt Dusk has been enthralling audiences around the world for years, leaving in his wake a series of radio hits, acclaimed albums, and a loyal fan base that continues to grow with every passing year. After several successful jazz and pop albums, Dusk returns to his roots with Sinatra, an up-tempo tribute to the Chairman of the Board himself, the man who sang some of the most beloved songs of all time.

An energetic show with all the production value of a Broadway musical, Sinatra, takes the audience on a musical journey through Frank’s incredible career, including its ups and downs, hilarity and heartbreak. Through Matt Dusk, we re-visit Ol’ Blue Eyes from his days making Bobbysoxers swoon to his time with the Rat Pack, cracking jokes and singing tunes before heading out to hit the blackjack tables. A career that spanned decades is carved into one spectacular night of music and fun.

‘It’s like Sinatra at the Sands,” Dusk says from his home in Toronto, “a night of crooning and cocktails. I’ve been singing these songs since I could rent a tuxedo, and there is nothing more swingin' than stepping on stage with a smokin' band performing timeless hits that everyone knows. This show is about the music, the musicians and the memories from that era.”

After twelve studio albums that have racked up numerous Gold and Platinum awards along the way, it’s interesting that Dusk has chosen just now to pay tribute to the man who first inspired him to sing in the first place.

“Frank’s music has connected with people for decades, and so many personal memories are anchored around his songs,” Dusk explains. “I sang his songs to my daughter when she was born, and I’ve even sung ‘em at divorce parties.” He laughs, but his point is clear: the music of Frank Sinatra is not only timeless, it’s also the soundtrack to many different parts of people’s lives.

Dusk feels the time is right for revisiting Sinatra’s catalog, and not just for those who fell in love with the songs when they were new.

“It’s hard to imagine that anyone wouldn't know who Frank Sinatra was,” he says. “but in my numerous conversations with people under 30, it surprises me that some don’t. I love to be that first introduction to one of the greatest singers of the 20th century, a man who influenced so many artists from Bob Dylan to U2. Great music never dies, and neither should Frank’s legacy.”