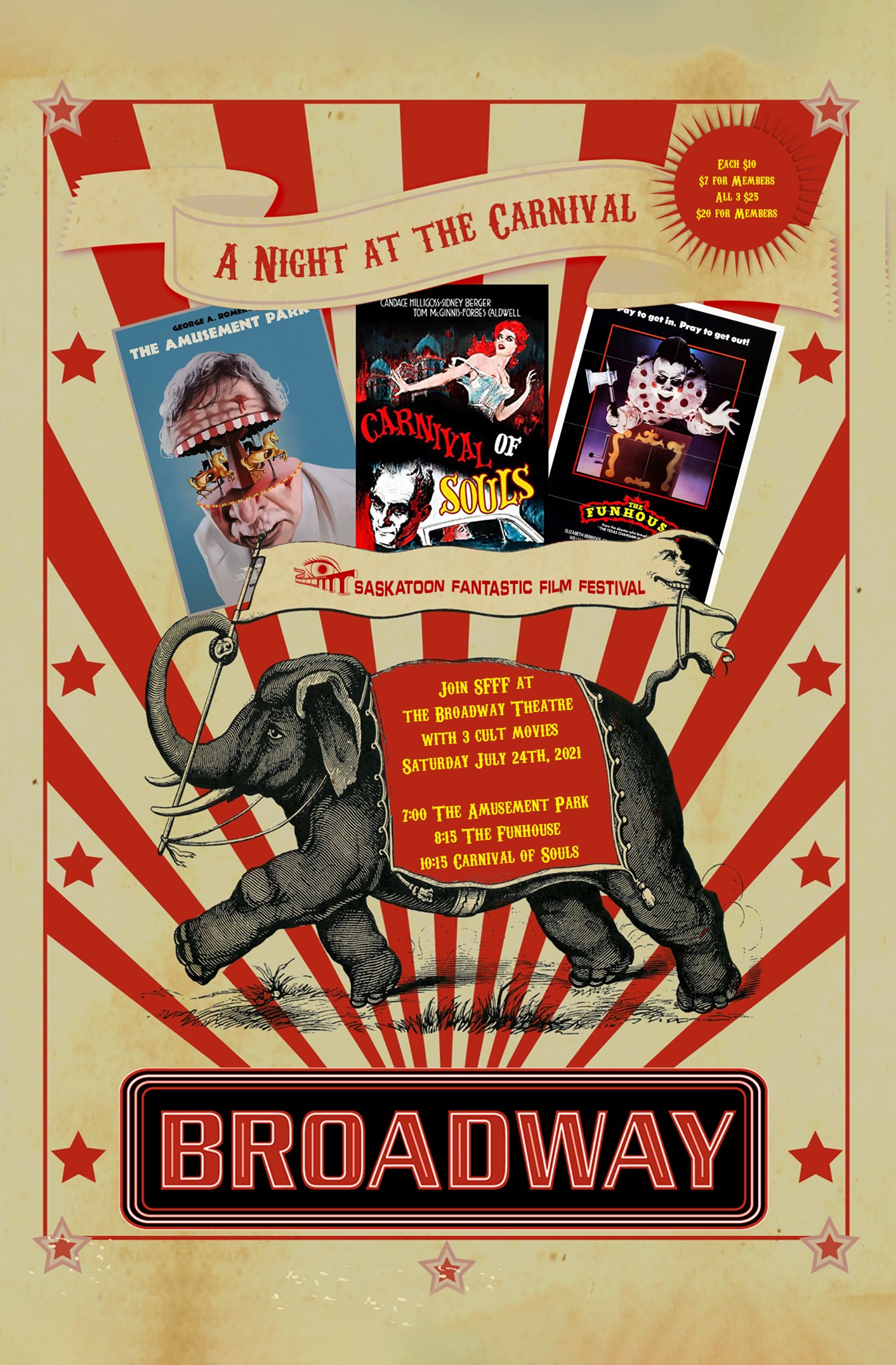 SFFF Presents The NIGHT AT THE CARNIVAL Three-Ring Fright-fest!

A Night at the Carnival Triple Bill!

Join Saskatoon Fantastic Film Festival with a return to the theatre on July 24th with A Night at the Carnival Triple Bill!

For information about membership pricing and membership inquiries, please reach out to our Box Office!

7:00 pm - First up is George Romero's THE AMUSEMENT PARK (1973). An elderly gentleman goes for what he assumes will be an ordinary day at the amusement park, only to find himself in the middle of a hellish nightmare instead. The AMUSEMENT PARK is a 1973 American surrealist psychological thriller film directed and edited by George A. Romero from a screenplay by Wally Cook. It stars Lincoln Maazel, Harry Albacker, Phyllis Casterwiler, Pete Chovan, and Sally Erwin. The film was commissioned by the Lutheran Service Society of Western Pennsylvania as an educational film about elder abuse but was shelved. Thought lost until 2017, when a 16 mm print was discovered. This is your one and only chance to see THE AMUSEMENT PARK on the big screen!

8:15 pm - Following up on the psychological terror, we dive straight into Tobe Hooper's 1981 slash, THE FUNHOUSE. Also known as CARNIVAL OF TERROR, four teenagers trapped with a deformed killer inside a dark ride try to survive the night. Join us for Tobe Hooper's first major studio production following THE TEXAS CHAINSAW MASSACRE and EATEN ALIVE.

10:15pm - We wrap up the night with the film that has inspired filmmakers such as David Lynch and George Romero, CARNIVAL OF SOULS (1962). Mary Henry, a young woman whose life is disturbed after a car accident, relocates to a new city. She finds herself unable to fit in with the locals and becomes drawn to an abandoned carnival. Carnival of Souls went largely unnoticed by critics upon its initial release and received "delayed acclaim" in the ensuing decades. Now regarded by many film schools as a classic, often praised for its lighting and sound design, in which sight and sound come together in a horrifying way.

Advance tickets also available in-person through The Broadway Theatre Box Office and over the phone at 306-652-6556., as well as at the door on the night of the show!