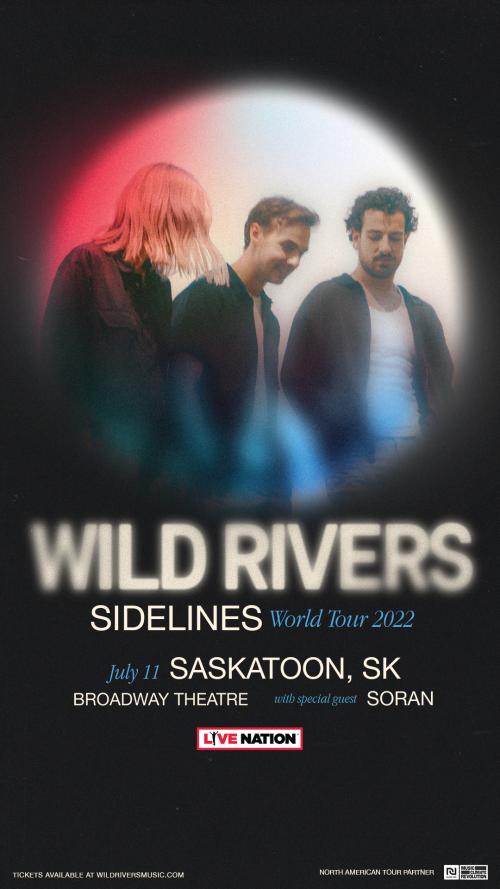 “The more I see, the less I know about it.” It’s one of the first, most prominent lyrics on Sidelines, the much-anticipated full-length album from indie trio Wild Rivers. The phrasing is brief but says everything about adjusting to young adulthood — and beyond. The world places infinite pressure on us to have a plan for the future, but, as Wild Rivers eloquently articulate throughout Sidelines, it’s healthier to acknowledge — and even embrace — the not knowing.

Comprising Khalid Yassein [guitar, vocals, keys], Devan Glover [vocals], and Andrew Oliver [lead guitar, synths], Toronto’s Wild Rivers have a gift for penning introspective lyrics and genre-fluid melodies that transmit wisdom beyond their years. The 10-track Sidelines, co-produced by Peter Katis (The National, Interpol, Sharon van Etten) and Wild Rivers and recorded in Connecticut, Los Angeles and Khalid and Devan’s college town of Kingston, Ontario, touches on coming-of-age themes, such as learning how to be more present and coming to terms with life’s unpredictability.

In many ways, the group’s own story is one about embracing the unknown. Born in Canada, Khalid, who is half-Egyptian, and Devan, who spent her childhood in London, England before returning to Canada, first connected at Queen’s University in Kingston in 2013. Starting out as an acoustic singer-songwriter project, Khalid and Devan expanded their aesthetic to a more full-bodied sound, adding multi-instrumentalist Andrew, who Khalid calls their “Swiss army knife.”