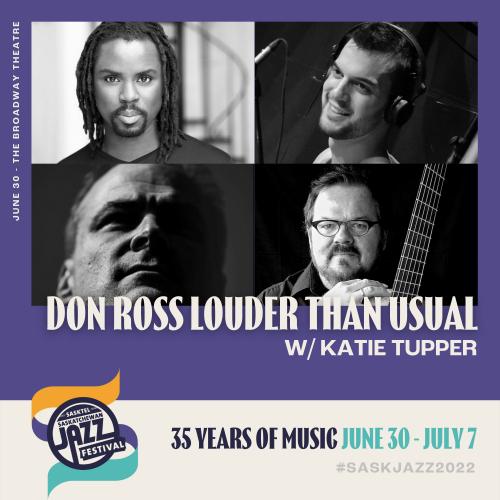 Canadian guitar legend DON ROSS has been touring internationally for the last 30 years, bringing his trademark groove-based style to audiences in Canada, the USA, Europe, China, Japan, Korea, Russia, India and Australia in the process. His new project, Don Ross Louder Than Usual, is a new collaborative unit that Don has started to achieve some of the arrangements of many of his tunes that, though they work well in the solo context, were actually conceived as working well in a band context.

The core of the band is a quartet consisting of Andrew Craig on keyboards, Jordan O’Connor on bass, Marito Marques on drums and Don on guitar and vocals. The band got its start in 2018 when Don was invited to perform in ensemble at the Ottawa Jazz Festival. Their sold out show was very well received, and made the band eager to showcase further.

Don Ross was born and raised in Montreal to an Indigenous Canadian mother and a Scottish immigrant father. His bilingual, multicultural upbringing was, perhaps, one of the most quintessentially Canadian experiences one could hope for! He eventually graduated with a Music degree from Toronto’s York University, and then embarked on an award- winning solo composing, recording and performing career that has taken him to dozens of countries over the course of 18 CD releases.

Beneath the painted hues and infinite prairie skies of Saskatoon -- a city in the heart of Canada -- lies a soulful, creative spirit that proves there’s much more to the so-called ‘fly-over states’ than grassland and grain silos. Katie Tupper, a 24-year old neo-soul musician, embodies that spirit and is determined to show there’s an entire world of boundary-pushing, genre-defying artists at work within the often overlooked region. “How Can I Get Your Love?” Tupper’s second single, rising in the CBC Music Top 20 chart, currently at #7, deals in a blanketing mixture of Neo-soul and exquisite folk, seeming to speak for a region neglected all too often, displaying just how richly her music roots through the native meadows and grasslands (or as she refers to them here, “fields of butter”). It’s a song that at once speaks of all the possible partners we miss out on from sheer cluelessness, and ultimately centers around a single, great passion.

Mask-wear is enforced and required at all events in our venue. You must keep your mask on at all times, and may only remove it while actively consuming food or drink from our concession, while seated. We will have extra disposable masks available and one will be provided to you should you show up unprepared. Please direct any questions to our box office during office hours. Thank you!