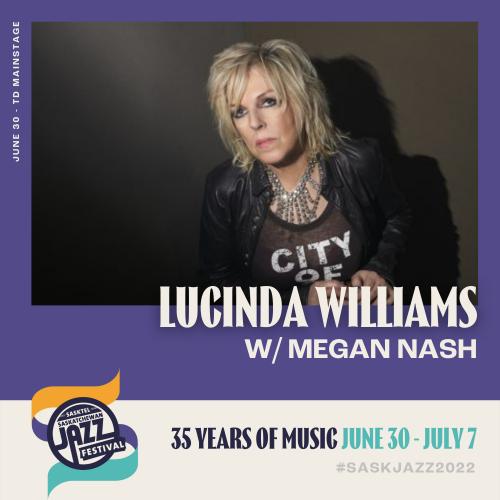 “It’s all come full circle,” says Lucinda Williams about her powerful new album, Good Souls Better Angels. After more than forty years of music making, the pioneering, Louisiana-born artist has returned to the gritty blues foundation that first inspired her as a young singer-songwriter in the late 1970s.

Lucinda Williams has traveled a long road since her 1979 debut, Ramblin’ on My Mind, followed by Happy Woman Blues, her first album of originals released forty years ago in 1980. (She says that she’s still “the same girl” except that now “I have a bigger fan base and I can afford to stay at better hotels.”) Over the course of fourteen remarkable albums, three Grammy awards, and countless accolades, including Time’s Songwriter of the Year of 2001, Williams is one of our most revered artists, beloved for her singular vocals and extraordinary songs. Her recent double albums, Down Where the Spirit Meets the Bone (2014) and Ghosts of Highway 20 (2016), released on her own label, received some of the best reviews of her career.

"Megan Nash is writing some of the most beautiful songs in this country right now” - Tom Power on CBC's Q. Megan Nash (she/they) is a songwriter that lives on Treaty 4 Territory. They’ve won and been nominated for numerous awards, including a 2019 JUNO Award nomination for Contemporary Roots Album of the Year for Seeker, 2021 Saskatchewan Music Award for Alternative Artist of the Year, and 2021 Best of Moose Jaw Award for Best Musical Artist. The recognition back home is in no small part due to her long and winding history of hitting the road, where she’s done international showcases in the United States, the UK, Germany, and Estonia on top of countless gigs in Canada’s small towns and sprawling metropolises.