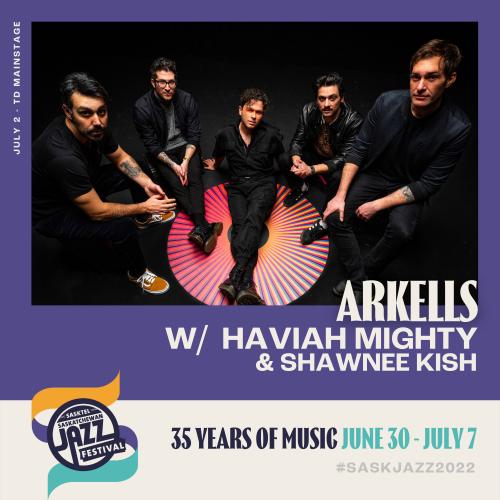 Hailed by The Globe and Mail as “the right kind of band for this decade,” Arkells are widely considered one of the most passionate, exuberant and in-demand live bands working today. As radio mainstays, sports-sync shoe-ins and curious students of culture, Arkells have remained ever present – building awareness and personal community experiences around their live shows and new music at every turn. The most emblematic example of this being The Rally, Arkells' hometown concert that was hailed as one of the biggest headline shows in the country, and is slated to return in June 2022. Arkells continue to unleash new music and tour dates as the band and their fans return to live in-person festivities. Their hotly anticipated new album BLINK ONCE is out now, with recently teased BLINK TWICE companion album due later this year.

Haviah Mighty didn’t need to change her birth name when she decided to dedicate her career to music. Mighty could not better describe Haviah’s craft of provocative challenges and uncompromising truths.

Based out of Toronto, Haviah has spent a lifetime developing her skills as a songwriter, vocalist, producer, and performer culminating in a style of profound introspection and incisive socio-political critique. Her dynamic combinations of rap, song, and instrumental, transition seamlessly from hip-hop to soul to afrobeats with a meticulous flow and cadence that transcends any traditional expectation of genre.

Named the winner of CBC’s 2020 Searchlight talent competition, Shawnee Kish has been celebrated as one of North America’s Top Gender Bending Artists (MTV), named by Billboard as an Artist You Need To Know and continuously uses her music to empower. An outspoken advocate for her Indigenous and LGBTQ2+ communities, she is a proud Two Spirit Mohawk who has shared the stage with some of the world’s biggest names — Lady Gaga, Madonna and Alicia Keys to name a few. 2021 will see Shawnee release a new EP that addresses her personal struggles over the past twelve months — “The‌ ‌main‌ ‌theme‌ ‌will be ‌lighting‌ ‌up‌ ‌what‌ ‌use‌ ‌to‌ ‌be‌ ‌and‌ ‌getting‌ ‌on‌ ‌with‌ ‌what‌ ‌is‌ ‌now.‌ ‌The‌ ‌songs‌ ‌represent‌ ‌becoming‌ ‌yourself,‌ ‌finding‌ ‌out‌ ‌where‌ ‌you‌ ‌were‌ ‌was‌ ‌not‌ ‌where‌ ‌you‌ ‌wanted‌ ‌to‌ ‌be‌ ‌and‌ ‌full‌y ‌embracing‌ ‌that‌ ‌in order to let go. ‌Light‌ ‌the‌ ‌Place‌ ‌up‌, ‌even‌ if it’s ‌unintentional” — and hopefully, return to touring. She will also continue her work with the We Matter Campaign and Kids Help Phone in hopes of empowering youth, providing strength and hope through music.