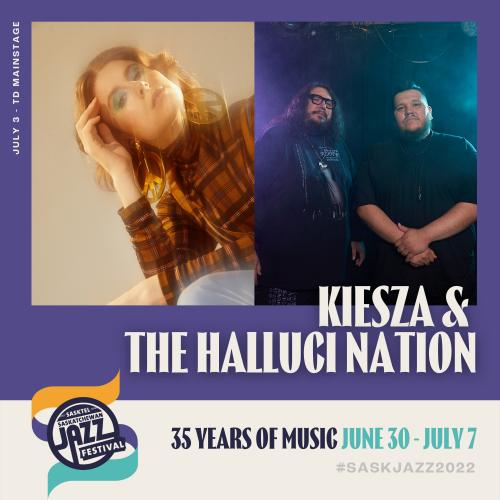 Kiesza and The Halluci Nation Kiesza:

Kiesza stormed onto the scene in 2014 with her impassioned hit “Hideaway,” which has since accrued over a billion streams; the accompanying one-shot video has been featured on several best-of-decade lists. Her debut studio album Sound Of A Woman saw her top charts globally and moved over a million units. Top-tier musicians soon rushed to work with her, and the rising Canadian talent soon counted herself as a feature on releases from the likes of Skrillex, Diplo, Duran Duran and Joey Bada$$, to name a few. The Canadian multi-hyphenate also has a foot in the fashion world, serving as the face of campaigns for top brands like Fendi and Maison Birks. After a life-changing car crash put her on a two-year hiatus, Kiesza returned as an independent artist, releasing her sophomore album 'CRAVE” through her own label Zebra Spirit Tribe in 2020. The new decade marks a promising new beginning for one of the last decade’s biggest breakouts—and this time, she’s doing it her way.

As they enter a new cycle, Bear Witness and Tim “2oolman” Hill of A Tribe Called Red are reintroducing themselves as The Halluci Nation, to reflect the evolution of their music and mission. The Halluci Nation, takes its name from a phrase coined by John Trudell, to describe the vast global community of people who remember at their core what it means to be human. As a visionary artist and activist, Trudell recognized the connection between his accomplishments and what ATCR did intuitively through music and art.

Trudell’s voice was the first heard on Tribe’s last record, We Are The Halluci Nation, and will, fittingly, be the first you hear on The Halluci Nation’s upcoming record, One More Saturday Night. The album is a love letter to the Electric Pow Wow gatherings launched at Ottawa’s Babylon nightclub in 2007. It represents an imagined denouement to the biweekly Saturday-night parties that ended abruptly in 2017, without ever getting the proper send-off. One More Saturday Night thus pays homage to the parties’ energy and momentum that elevated The Halluci Nation to this pivotal point in their career of fully mastering their own music style while also moving beyond club music; or “mixing dance music with dance music,” as Bear Witness succinctly puts it.