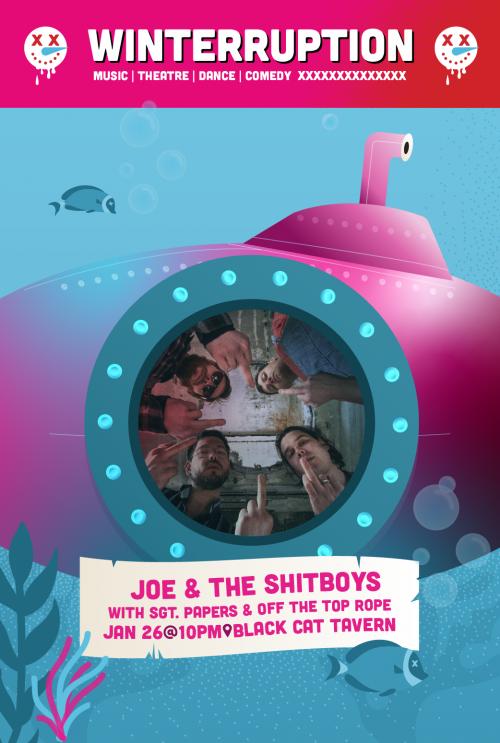 WINTERRUPTION - Joe & The Shitboys w/ Sgt. Papers and Off The Top Rope

Joe & The Shitboys are bisexual vegan shitpunk band from the Faroe Islands. They formed with the intention of calling out shitty behaviour in their conservative home country, where the rock scene is filled with boneless homophobes and meat-eating misogynists - and continue to take their aim at general vibe killers everywhere.

The live shows are full of energy, with a barrage of songs often under a minute long, like "Life Is Great You Suck", “Manspredator” and “If You Believe in Eating Meat Start With Your Dog”, being broken up by the flamboyant frontman roasting the audience relentlessly. The band have played every local venue there is, from G! Festival and the FMAs - where they won Band of the Year in 2020 - to DIY gigs on roof tops, public toilets, underground tunnels, museums and skateparks.

The response to their show at Iceland Airwaves led to a slot in the converted NME 100 tips list as well as extensive bookings from major festivals and a long-awaited UK headline tours. With rave reviews coming in from Iggy Pop, BBC Radio 6 Music, NME, DIY, Brooklyn Vegan and more, the band are already tipped as one of the most exciting new live acts around.

Now with the second album 'The Reason For Hardcore Vibes (Again)' out now, expect more ferocious fun to come from this incredibly unique four-piece.

Sgt. Papers is a duo formed in 2017 by Ivan and Felipe García, two brothers from the Sonoran Desert in Mexico. That year they put out their first record making noise in the Mexican rock scene and USA, starting to play festivals in those two countries.

Lots of touring and 3 Albums after, in 2022 Sgt. Papers is one of the most notorious bands from the new Mexican Scene, embracing a new fresh wave of rock bands, were both members also get involved in other projects, as producers, promoters and musicians. Always supporting collaborations and DIY culture.

in May 2021 the band releases their first single of their last album, under the american/Mexican label Devil In The Woods, all the music is produced and recorded by the band.

After the pandemic, Sgt. Papers started to tour and be active again all over Mexico, and also getting booked by festivals in Mexico and The US, such as Festival Marvin, Tecate Sonoro, Ruido Fest in Chicago, HOCO Fest in Tucson AZ, Freakout Festival in Seattle and upcoming tours in Mexico, and in the US southwest, west-coast and East Coast. The duo has gotten reviews for their energetic and fast live show, with mosh pits, sweat and loud music as their signature.

Off The Top Rope:

As a precocious brat, wrestling was king, and knowing your holds pretty much guaranteed you a spot at the front of the lunch room line-up. So it's only a tiny bit of nostalgia that ushers in those immediate feels for the grapple-gripped dudes of Off The Top Tope - punk rock that most of us would equate with beer guzzlin', fake sick days from work and running in circles on a sticky, sticky floor. Shouty vocals that harken back to the interview subjects corralled by "Mean Gene" Okerlund, this sharpshooting trio possesses and unabashed love of bashy pop-punk playfulness that's only eclipsed by their threatening, snot-addled clench-core. Also, I have a sneaking suspicion that they like wrestling a whole lot.