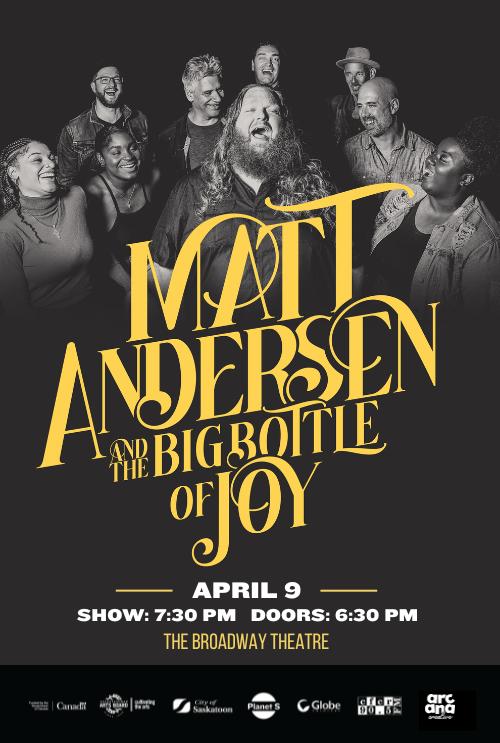 Show at 7:30PM, doors open at 6:30PM. All Ages. Until further notice mask wear is required at The Broadway Theatre.

The Big Bottle of Joy is about celebration - hard-won, overflowing, exuberant celebration. Matt Andersen’s latest long-player lives up to the grand title from its opening song, “Let It Slide”; a muscular, organ-drenched urge for people to chill out and be good to each other - to its understated, romantic curtain-closer, “Shoes.” Andersen finds reason to sustain this celebration of the life we share together everywhere - on the road, missing a lover; between the sheets in a southern Ontario motel room; from Montreal “all the way to New Orleans;” in a “little kitchen ballroom” on a quiet night at home. Over a dozen songs infused with raw blues-rock, rollicking Americana, thoughtful folk, and ecstatic gospel, he testifies to something we could all do well to remember: the time we have together is special, so let’s spend it the right way.

“Being good to each other, you know, in taking care of each other - those are the biggest things I want to put out there,” Andersen says. “If we're in it together, it'll be a lot easier than trying to do it on our own.”

When Matt Andersen steps on stage, he brings a lifetime of music to every note he plays. His latest album, The Big Bottle of Joy, is all about hard-won celebration; a dozen songs infused with raw blues-rock, rollicking Americana, thoughtful folk, and ecstatic gospel. Andersen’s stage presence, buoyed by his spectacular live band (also called The Big Bottle of Joy), is informed by decades of cutting his teeth in dusty clubs, dim-lit bars, and grand theatres all over the world, delivering soulful performances that run the gamut from intimate to wall-shaking. In the studio, he’s always brought the same attention to detail and commitment to craft as he has to his live show, and the result—a multi-faceted and poignant body of work—has led him to amass over 22 million streams on Spotify and 26 million views on YouTube. In addition to headlining major festivals, clubs and theatres throughout North America, Europe and Australia, he has shared the stage and toured with Marcus King, Beth Hart, Marty Stuart, Greg Allman, Tedeschi Trucks Band, Randy Bachman, Jonny Lang, Serena Ryder, and more. Andersen nabbed the 2013 and 2016 European Blues Awards for Best Solo/Acoustic Act, was the first ever Canadian to take home top honours in the solo category at the 2010 International Blues Challenge in Memphis, won the CIMA Road Gold award in 2015, and has won multiple Maple Blues Awards.